The top 5 reasons to marry a Chinese woman

If you’ve met a Chinese woman who you care about deeply, you may begin to think about the practicalities of getting married. There are many reasons that this is probably a great idea.

For decades, western men have met and married Chinese women, and thanks to online dating websites, it’s never been easier for you to meet a Chinese woman that you could fall in love with.

If you’re already in a relationship with a Chinese woman, or you dream of meeting one, the idea of marriage can be intimidating due to the difference in cultures, traditions, language and the huge geographic distance between you and her.

However, there are many reasons why marrying a Chinese woman is a good idea. Here are five of the top reasons.

Let’s not pretend anything otherwise, but Chinese women are known to be among the most beautiful in the world. For some men, that may be reason enough to marry; after all, many Chinese ladies maintain their incredible looks, perfect hair and blemish-free skin into their old age.

However, beauty is more than skin-deep. As a nation, Chinese people are loving, caring and intelligent. This makes a Chinese woman a perfect option for marriage.

China is a very competitive place, regardless of which province or city you are in. If you like meeting women who are very driven, ambitious and strive to improve themselves, then marrying a Chinese woman will almost certainly appeal to you. 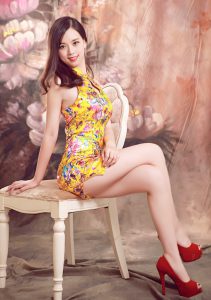 Once you have the love of a Chinese woman, you’re likely to have it for life. Love and loyalty are very important in Asia, and so your Chinese bride will likely stick with you and shower you with love and support for as long as you both live.

It could be great for your career and hers

If you’re someone who values a career, then marrying a Chinese woman could be very beneficial to both of you. China’s economy is one of the fastest growing on earth and a great place to be in business. Marrying a lady from China can help you have an edge in your industry by learning the language and getting to know the specifics about operating in the complex Chinese market.

From a relationship point of view, a recent research paper also suggested that Asian-white married couples are making the most money, so it could certainly pay on the financial front.

The family is hugely important

Last but not least, if you want to bring up a family of your own, then marrying a Chinese woman is a great move. The family is very important to the Chinese people, and once you’re accepted into her family, you will really value its importance.